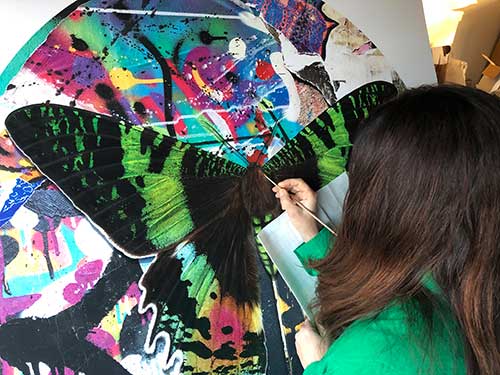 Evi Antonio’s art is a celebration of the intricate details of the natural world. From the wing structure of a five horned rhinoceros beetle to the tentacles of a common lobster, she is driven by the desire to reveal and pinpoint details that might otherwise go unnoticed.

“Digital painting techniques enable me to work in a much larger scale” explains Evi. “ The result is as if we see the subject under a magnifying glass; I want to evoke and share my sense of awe and wonder that these creatures co-exist in our world.”

Evi trained and worked as a scientific natural history illustrator for many years. She is greatly inspired by the lithographic plates and hand-coloured engravings of the 19th century which were used to document scientific discoveries of the time. Her creative approach is informed by this combination of professional experience, an almost obsessive eye for detail and a real passion for the traditions of natural history illustration.

November 2017 – The End of the Tale,  Group show. Hybrid Gallery